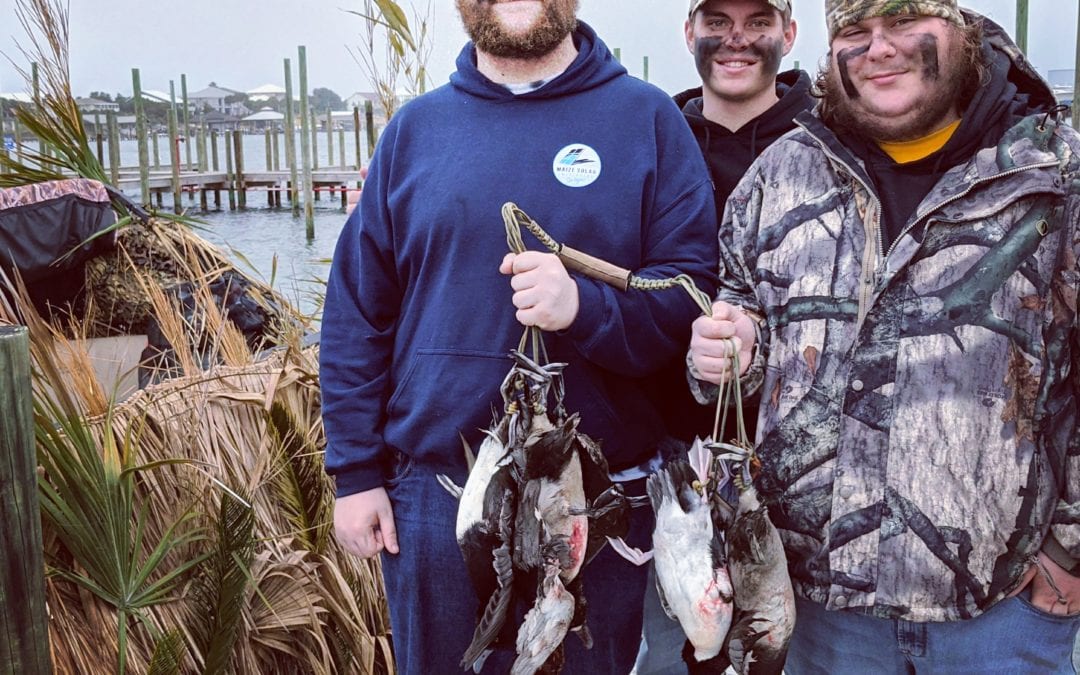 Quote: “I don’t shoot innocent ducks just the ones trespassing in my decoy spread” – Stephen Lee

Duck season 2019/20 was one of those years that we have heard about. We have heard stories of past seasons in far away places that have had a season like this. A season where the ducks never showed up until the very last week or so. To be completely honest I never actually thought it would happen to us, thus far we’ve been immune to crazy weather. Sure it storms and we have to cancel on occasion due to a small craft advisory, but we have taken a little too much comfort in “Knowing” that the ducks will eventually show up in impressive numbers. This year that did happen, but not until the very last week of the season.
Don’t get me wrong. As a outfitter I’m more than aware that the success of a hunt can not be measured by the trophy or harvest numbers themselves. We met lot’s of great people from New York, Kansas City & Birmingham. Lots of laughs were had by all and no one complained about the wonderfully prepared meals at the Flora-Bama Yacht Club, but the ducks simply did not show.
The very 1st part of duck season 2019/20 we did take advantage of our duck preserve because it was 70 degrees outside so we needed all the help we could get. This unusually hot weather in January affected duck hunts across the South. I actually moved over Christmas break. The Panama City Beach area boasted temperatures on Dec. 25th in the high 70’s. On the few coastal duck hunts we ran around that time we ended up upgrading most of them to a pontoon boat duck hunts.
The pontoon boat was clutch for two reasons during duck season 2019/20. Hunting off the pontoon boat allows us to hunt shallower water where the Buffellhead tend to hang out in the late season. The other way the pontoon boat came to our rescue is it allows us to provide a higher level of comfort during the hunt. That can be very important during slower days. With that being the case, everyone seemed to enjoy their time in the pontoon duck blind and yes, we did shoot a lot of Buffellhead this year.
Of course the temperature dropped significantly for the very last week and we did have several 100 Redheads and Bluebills bomb our decoy spread. In fact, on one of the very last hunts of the season about 200 Redheads cupped up and came right in as FWC was boarding our boat. Go figure.
So if you want my prediction, here it is, along with a little professional advice. You want to be here as close to the end of January as possible, and so does everyone else. Do yourself a favor and book early.