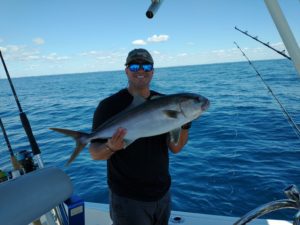 Frequently, our team likes to get out on the water and fish with some of the captains we put customers with. Fortunately, October is our favorite time of the year to get out and get fishing. The cooler weather makes the trip so much more comfortable and the water a little calmer. Now that Amberjack is finally opened on October 1st, we decided to get with Captain John of Reel Therapy Charters and go after some Amberjack.

We started the day with a slight delay due to the higher wind from the night before and into the morning. After about a 10am arrival at the dock, we got going. Our first target was to try to catch some live bait around the Buoys right on the outside of St. Andrews Bay. The current was ripping though as the tide was going out and we didn’t have any luck catching live bait at our first stop. Lucky for us, the weather and water conditions just improved and improved as the day went on.

After a few miles haul, Captain John brought us to a spot in about 30-40ft of water to see what we could find around some sunken bridge structure. No luck on any Amberjack here even though it looked like there were some on the finder. Turns out there were giant school of bait fish here being chased by some rather larger Barracuda all about 5-10 feet under the surface. This pit stop produced some live bait using Sibiki Rigs that would come in handy later in the trip.

When the live bait bite died down, it was time to move. A more miles and we were in about 80ft of water and the reading on the finder looked very promising.  We didn’t want to run through all our live bait too fast so first we started out on some frozen cigar minnows and Boston mackerel. A couple bites and a few broke off.  Then Captain John started using Nomad Vertical Jigs. Then the bite turned on in a way few of us had ever seen amberjack behave. We’d drop to their depth and within a few motions of the jig, one would be on, then as the hooked was reeled up, 6 or 7 of the other ones would swarm around it almost to the boat. As this continued, we used a combination of the jigs and the live bait we caught, and it seemed like there wasn’t any two-minute time period going by without at least one of the four of us fighting an amberjack. All that we landed were undersized, but with the water so clear, we could see the larger smarter ones mixed in the bunch. One of those big guys was fighting hard and probably was a keeper but a shark made off with the tail 80% of that fish. The tax man struck again. Some of the live bait we free lines didn’t want to go deeper, however, we even saw some of these smaller amberjacks breach the water going after those baits after they followed the jigs up.

After we exhausted the live bait and had all but our last jig broken off by stronger Amberjack, the bite at our honey hole slowed down and time on our trip was running out.  Captain John wanted to try one more spot before we head back in for the day. We had the same situation as before. We could see the amberjack in the crystal-clear water, but the ones at this spot were far more finnicky and didn’t quite want to feed like before. With the bite being slow and running out of bait, it was time to go back in. After the whole trip, we might not have caught any of the 34 inches to the fork of the tail or bigger keepers, but it was awesome day.

In total, the four of us, Captain John included, landed 4-6 amberjack a piece and each had even more that either broke the line or spit the hook, plus the one the shark got. We all discussed on the way back to the dock and that was the most amberjack any of us had ever caught on a single trip before. At the end of the day, we made it back to the St. Andrews Marina feeling very good and accomplished.  Captain John of Reel Therapy Charters showed his wealth of experience, his adaptability, and put us on the bite for a phenomenal trip. We will be joining him for more in the future and any Gulf Coast Sportsmen in the area should get on the bite!